The St Hugh’s Club Paper The St Hugh’s Club was founded in 1898 with membership open to former students and those present students who had completed one year’s residence. It published the Club Paper, initially twice a year and then annually. The early issues carried a list of members’ contact details, members’ letters and club notices but, from 1910, it expanded to include College news, library book lists, births, marriages and deaths, club accounts and minutes of meetings and an expanded section on members’ news. The Club was eventually superceded by the Association of Senior Members in 1926 (though it continued to exist until 1930) and the Club Paper gave way to The Chronicle. The archive contains a complete set of Club Papers from Jun 1898 to Apr 1928 (though there was a hiatus 1920-1925, followed by a much reduced publication). Below are links to the complete set of thirty issues. 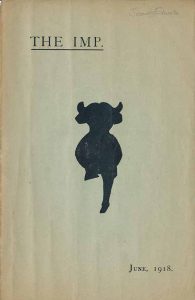 The Imp The Imp was initially founded in 1918 as a literary student magazine but quickly expanded, in 1920, to cover a broader range of topics and included sport and society reports and reviews of entertainments. The archive holds an almost complete set of the Imp from the first issue in June 1918 to the last issue in June 1931, after which it was succeeded by the Cygnet. Below are links to all of the issues that we have but if anyone finds one of the missing issues then we would be delighted to know about it! 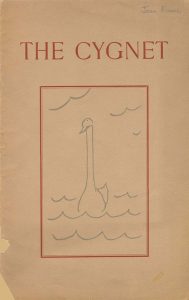 The Cygnet The Cygnet was founded in 1931 as a successor to The Imp. The archive holds an incomplete set of issues until Mar 1937 – it is unclear if this was the last time the magazine was produced. Below is a link to all of the issues that we have – again, any missing issues would be most gratefully received if found.

The Chronicle The Chronicle is the annual magazine which was, until 2013, produced by the Association of Senior Members (it is now produced by College). It contains a variety of information about the life of the college for the academic year and the activities of senior members including obituaries. The archive holds a complete set of the Chronicle from its first issue in 1928-29. Below are links to issues up to 1999-2000.

St Hugh’s Hall/College Reports The first Report of St Hugh’s Hall was produced in 1891 and gave a brief account of the Hall’s existence up to that date. Subsequent issues contained information on committees, a brief college report, appointments of senior members and a record of past students from the foundation of the college including examination results and appointments. The archive holds a number of loose and bound issues of these reports from 1891 to 1925-26. Below are links to the loose issues in the collection.