St Hugh’s College played an important role in the women’s suffrage movement in Oxford and beyond. Although College founder Elizabeth Wordsworth opposed votes for women, students and dons alike were free to contribute to the debate and many did in important ways. The issue was discussed in College debating clubs in the 1890s, but formal organisation was slower. Leslie Bickmore (1906-09) intriguingly claimed in 1910 that  ‘insuperable difficulties’ had prevented the establishment of a College Suffrage Society. These difficulties were likely to have been practical rather than political as the College provided a generally supportive environment. Miss Moberly, Principal until 1915, was sympathetic and although not an activist herself, she did not stand in the way of the students and tutors who were. She had developed a warm friendship with Clara Mordan, a wealthy woman who became a major donor to both St Hugh’s and the militant Women’s Social and Political Union (WSPU).

Clara Mordan attended debates of the Oxford Students’ Debating Society and was friendly with many of the students who held the College Scholarship she had endowed. One of these, Margaret Crick, would become active in the College’s Old Students’ Suffrage Society and would join many other old members in WSPU demonstrations in London. 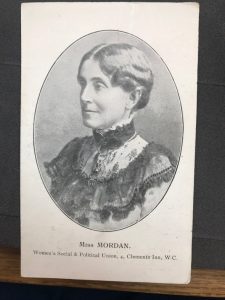 The college’s most famous suffragette alumna and WSPU activist was Emily Wilding Davison, who read English in 1895 and achieved first class honours in the university examinations for women. There is no record of a formal college response to her death at the Epson Derby beyond an unadorned observation recorded in the College Register: ‘June 1913, died at Epsom’. It is unthinkable that St Hugh’s suffragists did not know and discuss her as she was one of the most famous women in the country by 1913. But militancy was generally not encouraged within St Hugh’s or in the other women’s colleges. One undergraduate argued in 1913 that the WSPU’s journal Votes for Women, was prohibited in their common rooms. As the militant campaign gathered steam and opinion hardened against it, some supporters clearly became reluctant to express their backing too openly. Subscription lists published in Votes  for Women, for example, reveal donations made by ‘A member of St Hugh’s Hall’, rather than by name.  Yet, as in the rest of the country, the lines between the militant and the constitutional suffrage movement were often blurred and supporters were frequently found to be involved in both. 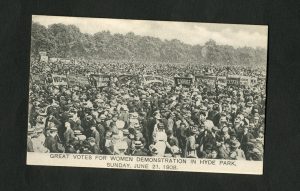 St Hugh’s students and dons were nonetheless more usually active in non-militant suffrage societies, not least because the constitutional societies enjoyed a much stronger presence in Oxford. Founded in 1904, the Oxford Women’s Suffrage Society, remained the largest in the city, attracting women and men, town and gown and activists who professed a wide range of political views. St Hugh’s was represented from its early days by Annie Rogers, tutor at St Hugh’s and member of the College Council. Many St Hugh’s members were drawn to this organisation, including Eleanor Jourdain, a tutor in French until she became principal in 1915. She described in the Club Paper travelling on a special train from Oxford to join a huge 1908 Suffrage procession in London, noting in particular what was ‘practically a gaudy in the street’ when she arrived in the capital as women assembled under the banners of their various Colleges, many wearing academic gowns. Jourdain joined the executive of the Oxford Women’s Suffrage Society in that same year and St Hugh’s was one of the many Oxford locations which hosted its meetings. 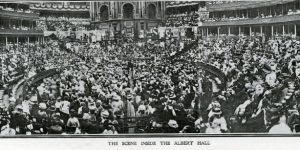 By 1911, St Hugh’s had its own green and white banner which sadly does not seem to have survived. It was carried in the Great Coronation parade at which St Hugh’s was represented by Miss Jourdain, Miss Ady, Helena Dekene and a ‘large contingent of St Hugh’s old students’. By that time a College Old Students’ Suffrage Society which allowed old members to march under the College banner and to meet at various suffrage events around the country had also been formed. It was spearheaded by Leslie Bickmore who lamented that St Hugh’s woman had been forced for too long to ‘march under false colours’ at various suffrage demonstrations and processions! Students had their own College suffrage society by 1908 but in 1911 they merged with the other women’s colleges to found the Oxford Students’ Society for Women’s Suffrage. Some suffragists wished the new society to pursue militant tactics, but it affiliated in the end to the National Union of Women’s Suffrage Societies (NUWSS), an umbrella body consisting of around 26,000 members and 16 federations by 1911. The student society had its own banner, designed by Edward New, which members carried for the first time in the Coronation Procession. Miss Jourdain described the banner as representing ‘Oxford as a golden city, with towers and pinnacles true to life, against a background of sky and dark blue hills’.

As well as producing supporters and donors, St Hugh’s provided a venue in 1913 for a NUWSS Suffrage Summer School. The College hosted 46 suffrage scholars who spent two weeks in St Hugh’s, learning about ‘a wider knowledge of the facts connected with the various sides of the movement’, in addition to attending classes in practical skills such as public speaking, canvassing, banner making and engaging with the press. 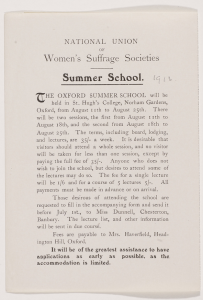 During 2018, St Hugh’s celebrated the achievements of the College and its alumnae in winning the vote for women and in leading feminist and progressive campaigns in the late nineteenth and twentieth centuries. Prof. Senia Paseta curated Sappho to Suffrage: Women Who Dared, an exhibition in the Weston Library which features many of the women who were active in the Oxford campaign as well as the 2018 suffrage wall which features a number of contemporary St Hugh’s alumnae. Further information can be found here.