The Lady Ademola Lecture (online): “The Education I Nearly Missed” 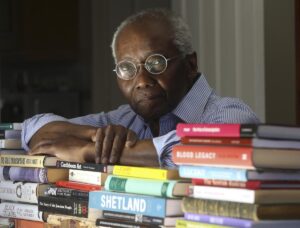 All members of the University of Oxford community are warmly invited to join us for The Lady Ademola Lecture to be given online by Sir Geoff Palmer OBE, entitled: ‘The Education I Nearly Missed”, on Thursday 9 June 2022, 6pm-7pm (UK time).

When Geoff migrated from Jamaica to London in 1955 to re-join his mother who had migrated in 1951, he then had an elementary education. On his arrival his mother had secured him a job in a local shop. Although designated educationally sub-normal by a school, he often reflects now on the education that gave him BSc, PhD, DSc degrees, allowed him to teach the owners of successful businesses and invent the barely abrasion process. He was a consultant for large brewing companies and advises widely on equality and the history of slavery. Geoff, whose real name is Godfrey, has gained various awards including honorary degrees, professorships, a knighthood, the first honorary consul for Jamaica in Scotland and Chancellor of Heriot-Watt University. He states that race is an invention and that a diverse society needs diverse management to be fair and efficient. He will outline how he nearly missed the education that changed his life

Sir Geoff is a Professor Emeritus in the School of Life Sciences at Heriot-Watt University in Edinburgh, Scotland and a human rights activist, as well as being involved in a considerable amount of charity work in the community.

Booking Information
This online event will take place via Zoom webinar. To register, please fill in the booking form below by 4pm on the day before the event. You will have the opportunity to suggest questions for Sir Geoff on your booking form, and you will also be able to ask questions during the webinar by typing in the Q&A box.

Please note that you do not need a Paypal account to make a donation online when you book your ticket. If you would prefer to make a donation by cheque, please do book a free ticket below and post your cheque to: The Development Office, St Hugh’s College, St Margaret’s Road, Oxford, OX2 6LE. Please make your cheque payable to ‘St Hugh’s College’, and be sure to write your full name on the back of the cheque.

Joining details will be sent out to those who have registered on the day before the event (please ensure that you enter your email address carefully on the booking form).

We're sorry, but all tickets sales have ended because the event is expired.
Debit and Credit card payments are processed through our PayPal account. You do not need to be registered with PayPal to complete this transaction.
We use cookies on our website to give you the most relevant experience by remembering your preferences and repeat visits. By clicking “Accept All”, you consent to the use of ALL the cookies. However, you may visit "Cookie Settings" to provide a controlled consent.
Cookie SettingsAccept All
Manage consent