Between March and August 2013 Stuart was a Visiting Associate at the California Institute of Technology, hosted by Professor Bob Grubbs and Professor Dianne Newman. Since 2016 he has been an Associate Editor for the Journal of Medicinal Chemistry and is on the Editorial Advisory Board for Organic Chemistry Frontiers. Stuart is the President of the RSC Organic Division. His research focuses on the development of molecular tools to enable the study of biological systems. This work has been recognised by the award of the 2012 Prize for a Young Medicinal Chemist in Academia by the European Federation for Medicinal Chemistry, and the 2016 Lectureship of the Biological and Medicinal Chemistry Section of the RSC. 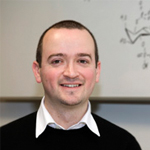 Position
E. P. Abraham Cephalosporin Fellow in Organic Chemistry
Subject
Chemistry
Department
Academic - Fellows & Lecturers
stuart.conway@chem.ox.ac.uk
We use cookies on our website to give you the most relevant experience by remembering your preferences and repeat visits. By clicking “Accept All”, you consent to the use of ALL the cookies. However, you may visit "Cookie Settings" to provide a controlled consent.
Cookie SettingsAccept All
Manage consent