Sarah Outen, who read Biology at St Hugh’s College (2004), has travelled around the world under her own steam – rowing, cycling and kayaking around the Northern Hemisphere in order to raise funds for a number of charities. Sarah set out from Tower Bridge in April 2011 and is to complete her circumnavigation of the globe today, paddling back under Tower Bridge at midday.

Having been rescued from the mid-Atlantic as Tropical Storm Joaquin approached her rowing boat, Sarah cycled from Falmouth to Oxford, arriving at St Hugh’s on Tuesday 27th October. Students, staff and fellows turned out to welcome her back to College. This marked the end of the cycle leg of the journey, before she set out to kayak down the Thames to London. 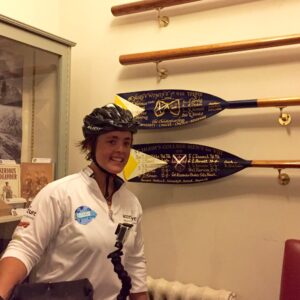 Sarah poses with the Blade her crew won in Torpids 2005

On Friday 30th October, Sarah began her paddle down the Thames from Godstow, in Wolvercote. Before setting out she hopped back in a rowing boat to join in the SHBC Senior Women’s training session, with the weather doing its best to emulate North Atlantic conditions!

If you would like to find out more about Sarah’s journey, and the charities for which she is fundraising, see http://www.sarahouten.com/

St Hugh's is delighted to be co-hosting 'Opening the PEN Archive, 1921-2021' with TORCH (The Oxford Research Centre in the Humanities) - one of a seri...
Read More

Congratulations to St Hugh's Men's First Boat who not only won blades but also made history by reaching the highest position ever reached on the river...
Read More

We were delighted to welcome so many guests to our inaugural 'Lady Ademola Lecture' which is part of the College's series celebrating the life and wor...
Read More
We use cookies on our website to give you the most relevant experience by remembering your preferences and repeat visits. By clicking “Accept All”, you consent to the use of ALL the cookies. However, you may visit "Cookie Settings" to provide a controlled consent.
Cookie SettingsAccept All
Manage consent