History of the College

St Hugh’s College was originally set up in 1886, to open up the opportunities of an Oxford education to poorer women. It was founded by Elizabeth Wordsworth and adopted the name and arms of St Hugh of Avalon who was Bishop of Lincoln, a position also held by Elizabeth’s father. The arms were officially granted to the College in 1980. Today, the College is a vibrant, co-educational establishment, which remains very proud of its radical tradition and beginnings. During over 130 years, it has provided first class educational opportunities to scholars, and become a renowned community of learning. The College has had notable alumni in Academia, The Arts, The Law, Politics, and almost every aspect of public life.

Our history also has some surprising episodes which you may not have heard of. Learn more here. 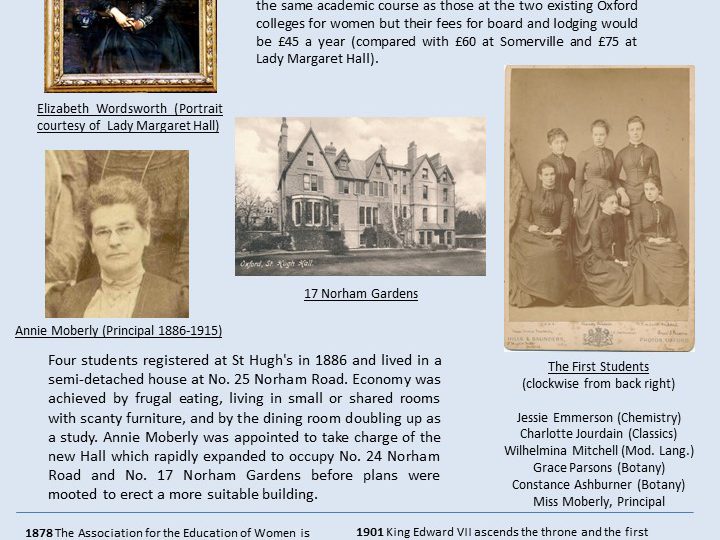 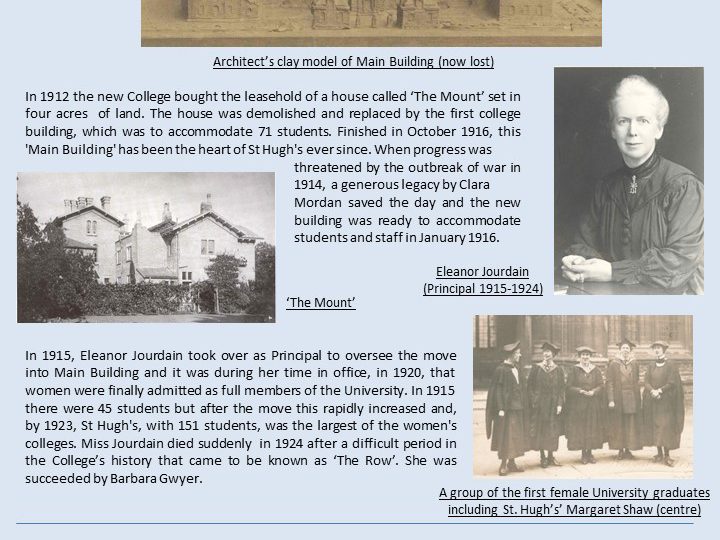 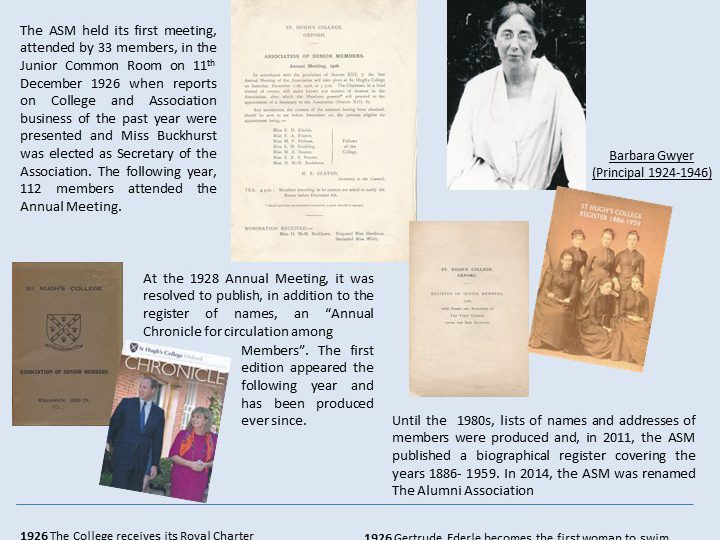 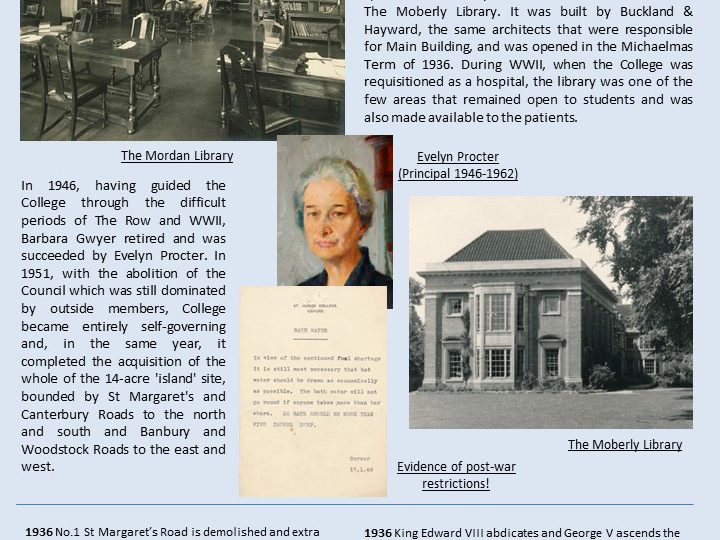 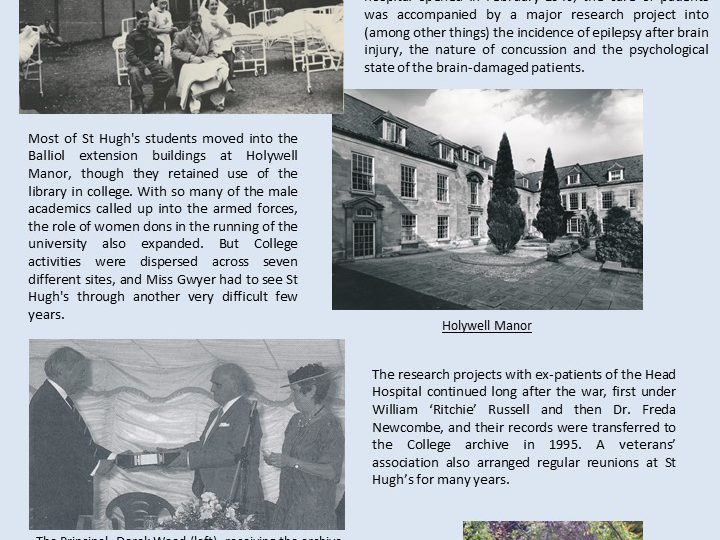 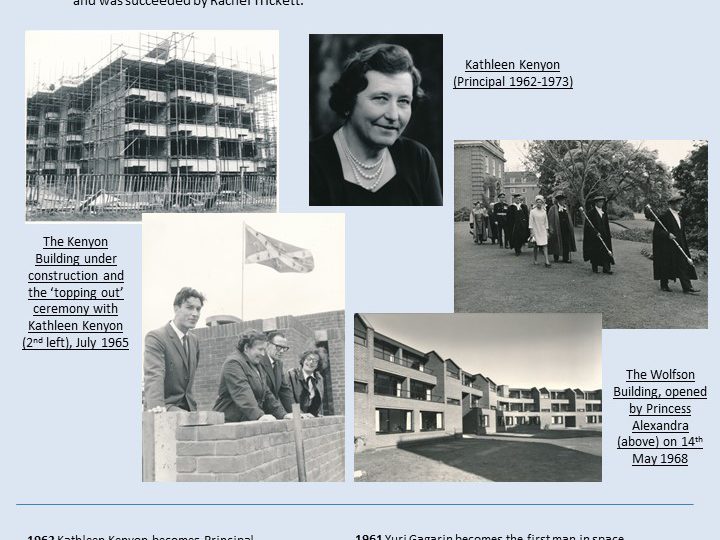 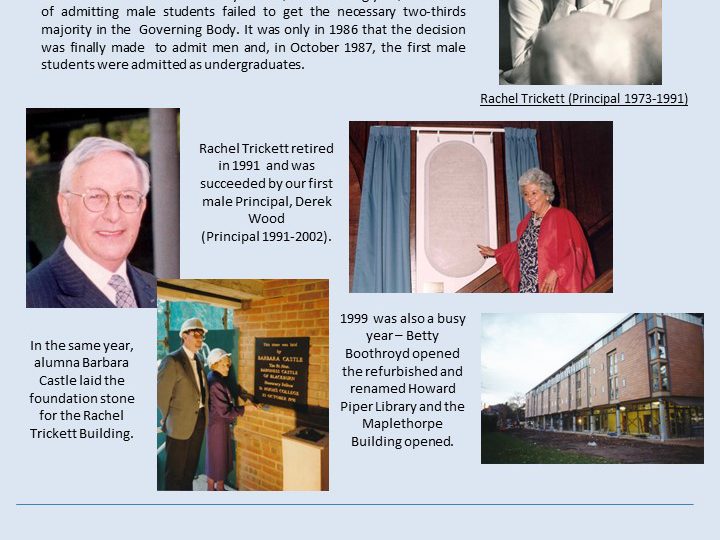 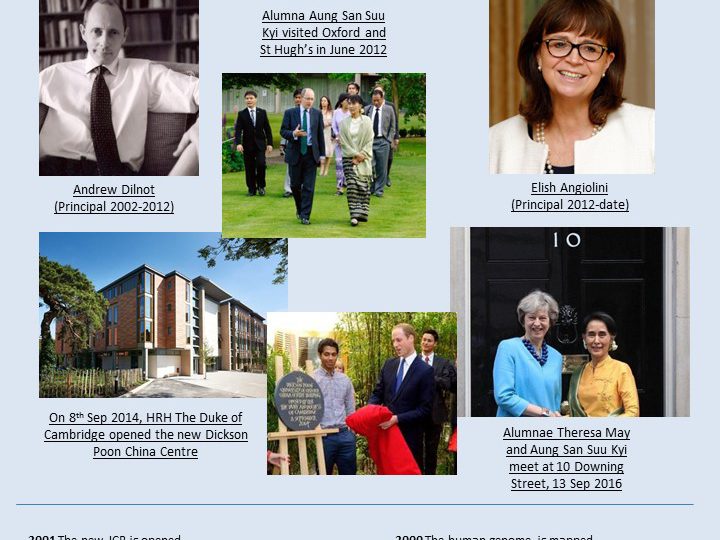 St Hugh’s was founded in 1886 by Elizabeth Wordsworth (great-niece of the famous poet William Wordsworth) to help the growing number of women ‘who find the charges of the present Halls at Oxford and Cambridge (even the most moderate) beyond their means’. Using money left to her by her father, who had been Bishop of Lincoln, she established the College at 25 Norham Road in North Oxford. She named the College after one of her father’s 13th-century predecessors, Hugh of Avalon, who was canonised in 1220, and in whose diocese Oxford had been. 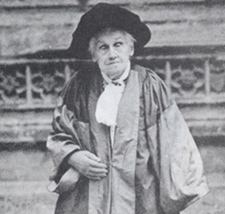 The College began to move to its present site in 1913, when it purchased the lease of a house called ‘The Mount’ from the Rev Robert Hartley for £2,500. This house was situated on the corner of St Margaret’s Road and Banbury Road.

Women were first admitted to degrees by the University in 1920 and most old students who were qualified for the BA and MA took them at once. Those not qualified were allowed until 1926 to complete their qualifications.

Between 1935 and 1936 No 1 St Margaret’s Road was demolished and a new library was built in the Mary Gray Allen building; it was named the Moberly library after St Hugh’s first Principal (the library was extensively renovated between 1999 and 2000 and renamed the Howard Piper library after a St Hugh’s alumnus).

At the outbreak of the Second World War the College site was requisitioned by the military for use as the Hospital for Head Injuries under the directorship of Hugh Cairns, the Professor of Surgery at Nuffield College. Brick huts were constructed in the grounds with space for 300 beds. 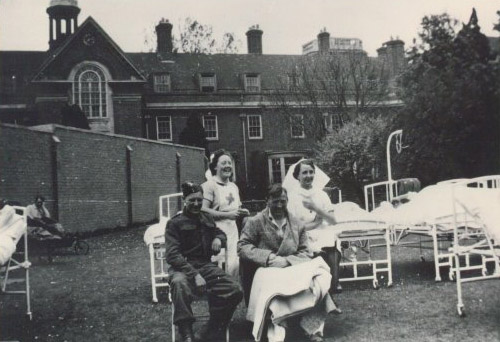 The College was de-requisitioned in 1945, but the hospital huts in the grounds remained in place until 1952. The College took the entrepreneurial approach of leasing them to University departments, including the Bureau of Animal Population, the Department of Zoological Field Studies and the Institute of Statistics.

St Hugh’s purchased the last remaining buildings around the periphery of the Estate, from St John’s College. We also acquired the freehold of The Shrubbery, whose leasehold had been acquired from Dame Gertrude Whitehead for £1,500 in 1943.

The College embarked upon an extensive and ambitious programme of building. The Kenyon Building, designed by David Roberts, was finished in 1965. The building houses 47 undergraduates over four storeys. The interior is constructed around a dramatic central staircase, and the building was designated a Grade 2 listing by English Heritage in 2008, in recognition of Roberts’ innovative design. Kenyon (named after Dame Kathleen Kenyon, the then Warden) was soon followed by the Wolfson Building, which was opened in 1967 by Princess Alexandra and Harold Macmillan. Although it must then have seemed much less significant than a Royal visit, the College’s decade closed in 1969 with the graduation of Aung San Suu Kyi, who obtained a BA in PPE.

In 1978, the Queen in Council gave her consent to a change in the College Statutes which opens all College offices and Fellowships to men. The College’s first male Fellows were Dr John Morris, Fellow and Tutor in Medicine, and Mr John Wilkinson, Fellow and Tutor in Geography. Both are now retired, but both hold Emeritus Fellowships and remain involved in College life.

St Hugh’s youngest ever student, Ruth Lawrence, graduated with a starred first class degree in Mathematics, aged just thirteen years. She went on to study a second undergraduate degree in Physics, and was awarded her DPhil in mathematics in 1989.

The College admitted 80 male students, in its final step toward a broad and inclusive education. This was a radical step, even for an institution which has always taken pride in its ability to implement radical ideas. However, it has been highly successful and the College is now fully and proudly co-educational.

The turn of the century brought two more significant building projects – the Maplethorpe Building which opened in 2000, and the renovation of the Howard Piper Library, named after a maths graduate who died in an accident shortly after his graduation. The library was opened by Betty Boothroyd, and contains statues of both Elizabeth Wordsworth and St Hugh.

The College celebrated its 125th anniversary with a summer garden party for over 1,200 guests.

Aung San Suu Kyi returned to St Hugh’s in her first overseas engagement following her release from 15 years’ house arrest. She was awarded an honorary degree at the University’s annual Encaenia celebration, and the College was delighted to welcome her back and host the celebrations in her honour. 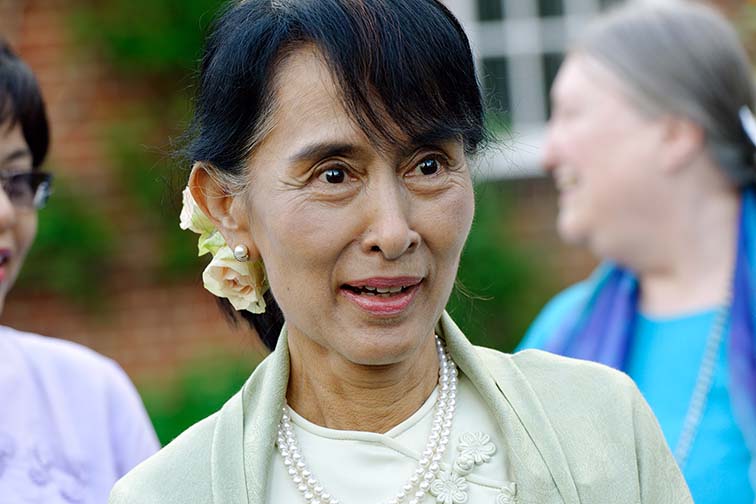 St Hugh’s opened the Dickson Poon University of Oxford China Centre Building, which was designed by David Morley (who also designed the Maplethorpe Building). The Dickson Poon building was funded by the philanthropy of many donors from Hong Kong, notably Mr Dickson Poon, who gave £10m toward the £21m project. The building provides 63 graduate bedrooms; teaching accommodation which is leased to the University of Oxford China Centre; the Bodleian Library China collection; and conference facilities. It was opened in September 2014 by HRH Prince William.