We are pleased to launch this series of profiles looking at the life and work of St Hugh’s alumnae who were ‘firsts’ in their respective fields. Many more alumnae will be added to this series over the coming months, but please do get in touch if you would like to suggest an alumna for inclusion, or indeed if you would be interested in contributing to the project by putting together a profile, by emailing development.office@st-hughs.ox.ac.uk.

Our deepest thanks to those alumni who have already contributed to the project.

Gwyneth Bebb led a short but extraordinary life during which she famously fought against the exclusion of women from the legal profession and became a pioneer for women lawyers.  She was the first woman to obtain a First Class in Jurisprudence at Oxford in 1911, however she was unable to be awarded her degree at that time as the University did not confer them on women until 1920. Were it not for her untimely death at the age of 31, she is likely to have become the first woman barrister.

In 2018 the St Hugh’s Alumni Association hosted a symposium in College entitled ‘A Woman is Not a Person’ on the life and work of Gwyneth Bebb and the impact of the Sex Disqualification (Removal) Act 1919. To watch the recording of that event, please click here. 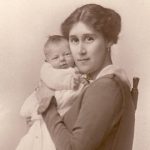 Dame Joan Evans enjoyed a long and distinguished career as an author and historian and was renowned for her remarkable collection of gems and jewels. In 1959 she was appointed the President of the Society of Antiquaries, the first woman to hold this position. Click here to read her profile.

Dr Evelyn Simpson was appointed a tutor in English Literature at St Hugh’s in 1919, and went on to become the first woman to be awarded a DPhil at Oxford for her thesis on John Donne in 1922. Click here to read her profile.

Professor Doreen Warriner was one of the very courageous leading women who went to Prague in 1938 to assist Social Democrat and Jewish refugees fleeing the advance of Nazism. For this she was awarded an OBE in 1941. 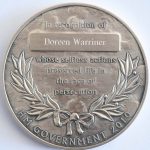 In 2018 she was awarded posthumously, by Her Majesty’s Government, a British Hero of the Holocaust Medal which bears the inscriptions: ‘In recognition of Doreen Warriner whose selfless actions preserved life in the face of persecution’ and ‘In the Service of Humanity’. 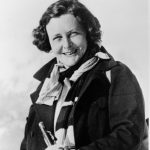 Barbara Castle was a Labour Party politician, and the longest serving woman MP in the history of the House of Commons until 2007. She is the only woman to have held the office of First Secretary of State (1968-70). She was a life-long advocate for the transforming power of socialism. Click here to read her profile. 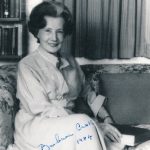 Dame Elizabeth Ackroyd was a civil servant and consumer rights campaigner, and served as the first director of the Consumer Council between 1963 and 1971. From 1965 she was a race horse owner and, in 1975, she was appointed to the Tote Board as its first woman member. 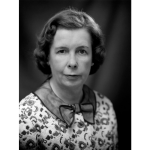 Solar astronomer Madge Adam was internationally known for her ground-breaking research on the nature of sunspots and their magnetic fields. She was the only woman undergraduate in her year at Oxford reading Physics, and the first woman to achieve First Class Honours in the subject in 1934. She went on to become the first postgraduate student in solar physics at the University of Oxford Observatory. She was also the first woman to be elected a member of Council of the Royal Astronomical Society in 1944. Click here to read her profile.

Lady Ademola was a lifelong advocate for women’s education and social reform. She was the first black African woman to achieve a degree at Oxford. Click here to read her profile.

In 2020 we were delighted to launch our new fund in honour of Lady Ademola to support graduate students and visiting scholars from Africa. If you would like to support the College’s effort to encourage greater participation and representation from Africa, please contact the Development Office on development.office@st-hughs.ox.ac.uk. 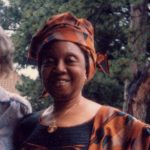 Kamila Tyabji was an Indian lawyer, social reformer and women’s rights activist. She was the first woman lawyer to argue a case before the Privy Council. Click here to read her profile.

Esmé Hadfield was a pioneering otolaryngologist, and the first woman to be appointed to the Court of Examiners of the Royal College of Surgeons in England in 1978. She is particularly remembered for her work on adenocarcinoma of the nasal sinuses. Click here to read her profile.

Sheila Cameron has enjoyed a distinguished career as a barrister and ecclesiastical judge. After graduating from St Hugh’s in 1956, she entered a professional world in which there was strongly voiced opposition to women, with some Chambers announcing that their policy was not to accept women as tenants. Despite having been told by her senior clerk when she was offered a tenancy that “this is against my express wishes: as far as I am concerned I will offer return briefs to the men in Chambers before you, even if they rank lower than you in seniority”, Sheila went on to prove herself to her colleagues in magistrates’ court while representing clients of the Mary Ward Legal Advice Centre, and to forge a successful career as a barrister. She practised at the Bar from 1958 until 2001. Outside her practice, Sheila’s major interest has been ecclesiastical law, a field in which she achieved a number of firsts and continued to work until 2009. Click here to read her profile.

Honorary Fellow and alumna Dame Liz Forgan is a celebrated journalist, radio and television executive. In 2009 she became Chair of Arts Council England, the first woman to be appointed to this position. Click here to read her profile. 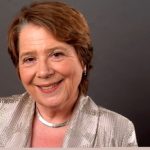 Aung San Suu Kyi read Philosophy, Politics and Economics at St Hugh’s College, matriculating in 1964. She became the first State Counsellor of Myanmar (in effect Prime Minister) when her party, the National League for Democracy (NLD), won the first openly contested elections in Myanmar in 2015, before which the country had been a military dictatorship for almost 50 years. Click here to read her profile, written by Veronica Lowe (Modern History, 1969), President of the St Hugh’s Alumni Association.

Acclaimed British conductor and musicologist Professor Dame Jane Glover was recently awarded the Royal Philharmonic Society’s Gamechanger Award for her pioneering work in bringing more female conductors to the stage. She has conducted all the major symphony and chamber orchestras in Britain, as well as orchestras in Europe, the United States, Asia and Australia, and she is much in demand on the international opera stage. She has been Music of the Baroque’s music director since 2002.

Throughout her distinguished career, Honorary Fellow and alumna The Rt Hon Baroness Heather Hallett DBE PC has been a pioneer for women in the legal profession and a champion for diversity among practising lawyers and in judicial appointments. She retired from her position as Vice-President of the Court of Appeal Criminal Division in October 2019, and she now sits as a cross-bencher in the House of Lords. In 1995 she was elected the first female Leader of the South Eastern Circuit of the Bar, and in 1998 she became the first woman to chair the Bar Council. Click here to read her profile, written by Veronica Lowe (Modern History, 1969), President of the St Hugh’s Alumni Association. 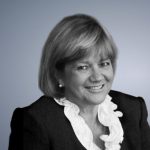 Dame Helen Ghosh became Balliol College’s first female Master in 2018. She previously served as Director General of the National Trust from 2012, following a distinguished career in the Civil Service. While a civil servant, she was the first – and so far the only – woman to serve as Permanent Secretary of one of the three “great Departments of State” (Treasury, Foreign Office, Home Office). Click here to read her profile.

The Rt Hon Theresa May MP served as Prime Minister of the UK between 2016 and 2019 and Home Secretary between 2010 and 2016. She was elected Conservative MP for Maidenhead in 1997. She is the first and only woman to have held two Great Offices of State. She also served as the first female Chairman of the Conservative Party between 2002 and 2003. Click here to read her profile. 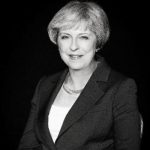 Rebecca Front is a BAFTA-award winning actress and writer, perhaps best known for her performance as Nicola Murray in The Thick of It. She has worked with several charities to raise awareness of mental health, and is a Patron of Anxiety UK. She is also an ambassador for Together For Short Lives and the deaf-blind charity Sense. While at Oxford, Rebecca became the first female President of the Oxford Revue. Click here to read her profile.

Alumna and Honorary Fellow Sarah Outen is a British athlete, adventurer, bestselling author and motivational speaker. She is the first woman, and the youngest person, to row solo across the Indian Ocean as well as the Pacific Ocean from Japan to Alaska. Click here to read Sarah’s profile.

The views and opinions expressed in the ‘100 years of Oxford degrees for women’ profiles are those of the authors, and do not necessarily represent those of St Hugh’s College.