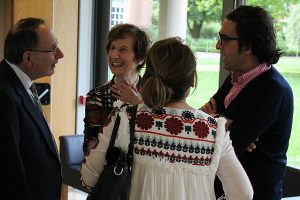 Princes, from Pinocchio to Foucault’s Pendulum’ to a packed Maplethorpe Hall in College last night.

A Fellow of the British Academy who has taught at Oxford and Cambridge, he has written widely on modern Italian literature, cinema and cultural history and is a leading specialist on the work of Primo Levi and on postwar responses to the Holocaust.

Taking his starting point from Machiavelli’s discussion of “fortuna” in The Prince, Prof. Gordon sought to investigate the role played by the notion of “luck”, in its many variations, in the context of modern Italian literature.

He signposted the fundamental anthropological, theoretical and cultural coordinates of the question, by referring briefly to a broad range of authors (including Primo Levi, De Martino, Gramsci and Esposito). Going on to show an extract from Michelangelo Antonioni’s little known documentary Superstizione,  Prof. Gordon proceeded to analyse selected passages from Carlo Collodi’s Pinocchio and Umberto Eco’s Il pendolo di Foucault. 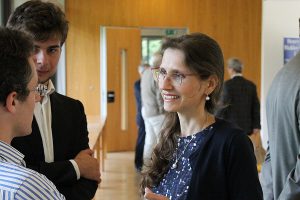 He concluded by suggesting that luck (and its opposite, misfortune) in the modern Italian context may indeed signal a new, localised modulation of the universal human experience of the unforeseen, or of chaos.

The lecture is dedicated to Henry Rowlatt Bickley, the father of Professor Olga Bickley.  She was the first Fellow and Tutor in Italian at St Hugh’s. Held every other year, the lecture series was in fact the first endowed at Oxford University for an Italian subject.

It has seen a diverse range of subjects covered, from Giuseppe Verdi and the Risorgimento to the Roman architecture of Leptis Magna (in modern day Libya). Professor Gordon’s lecture on ‘Luck in Italy‘ was the 25th in the series, with the inaugural lecture given by Sir Kenneth Clark on ‘A Failure of Nerve: Italian painting 1520-1535‘ back in 1965.