The Mordan Hall was packed on 26th April for an event to mark the launch of the Mary Renault Prize and celebrate the writings of St Hugh’s Alumna, Mary Renault (English, 1925). 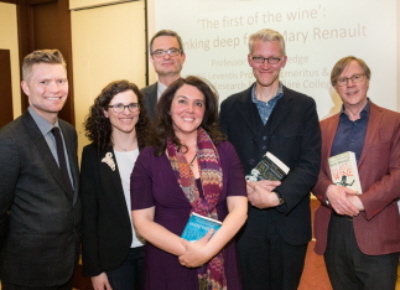 The event involved a lecture by Professor Paul Cartledge, Emeritus A. G. Leventis Professor of Greek Culture at the University of Cambridge, on ‘The First of the Wine: Drinking Deep from Mary Renault.’

This was followed by a discussion with the historians and presenters Tom Holland and Bettany Hughes, chaired by Donna Coonan, editor of the Virago Modern Classics series, which has recently re-issued all of Renault’s novels.

It was preceded by a reception, giving guests the opportunity to peruse an exhibition of material from the Mary Renault Collection held in the College Archives.

The Mary Renault Prize is to be awarded for essays on the theme of the influence of classical antiquity by pupils in Year 12 or 13 who are not themselves studying either Latin or Greek for their A-levels. In this, its first year, it attracted essays on an extraordinary variety of topics, ranging from Hypatia of Alexandria to detective fiction. We were thrilled that the three prize-winners, together with four of the commended entrants, were able to attend the Renault celebration.

St Hugh’s was also delighted to host earlier in the day a Classics taster afternoon. Mary Renault’s writings played a prominent role in this event too, as Dr Carol Atack and Professor Tim Rood used The Last of the Wine to explore the political and social history of the Athenian democracy.