The Building was opened by HRH The Duke of Cambridge on 8 September 2014. St Hugh’s awarded Sir Dickson Poon a prestigious Elizabeth Wordsworth Fellowship in March 2014 in recognition of his commitment to support and promote the ethos and academic endeavour of St Hugh’s College.

Sir Dickson Poon founded the Dickson Group of Companies in 1980. Since then the Group, which remains wholly owned by him, has expanded to become one of Hong Kong’s largest and most profitable retailing and wholesaling enterprises, with worldwide interests and subsidiaries. He also owns the Harvey Nichols Group in the UK. 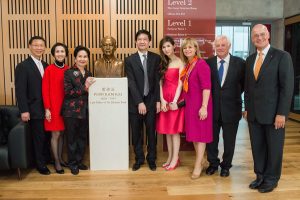