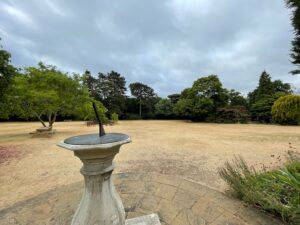 Learn to love our brown lawns!

I am often asked during the months of July and August why we refrain from watering our lawns at St Hugh’s. Unless one has access to an effective watering tool such as a sprinkler system that can be used during the night, watering throughout the day is not effective due to evaporation.

Sprinklers, even when used at night, are an extremely wasteful and expensive way to keep grass looking green. Watering a typical lawn at home for a few hours can use as much as an entire household’s consumption for a week. St Hugh’s has about five acres of lawns – some of the largest in Oxford, so it is easy to imagine the amount of water it would take to keep the lawns looking green.  Not only would this exacerbate a national water shortage problem, it is also questionable from an ethical point of view as there are many people suffering from the effects of extreme water shortage worldwide.

Watering during the summer months also causes an increase in pest and fungal disease later in the year. Many professional gardeners will use powerful fungicides, pesticides and insecticides to combat these problems. The direct impact these methods have on invertebrates and other wildlife is devastating and can potentially be hazardous to humans. While our lawns will turn brown as a result of the high temperatures which are increasingly becoming the norm in the UK, grass is an extremely hardy plant and almost impossible to kill. It will recover remarkably quickly once the rain returns, so the effort of watering is best placed elsewhere in the garden.

Without wanting to be supercilious, I believe brown lawns, for all the reasons I have mentioned above, should be looked at with as much pride as their green counterparts.