Professor Gabriele De Luca is a clinician-scientist in Clinical Neurology at the University of Oxford. He completed his neurology training at the Mayo Clinic, Rochester, USA where he was Chief Resident and an Assistant Professor of Neurology. During his time at Mayo Clinic, he won several clinical awards including the Robert J. Filberg Fellowship, an award given to the top Canadian trainee at Mayo Clinic, and the Henry W. Woltman Award, a prize given to the top resident/fellow for clinical excellence in Neurology at Mayo Clinic. On completion of his Neurology training, he returned to Oxford supported by the prestigious AANF/CMSC John F. Kurtzke Clinician-Scientist Development Award. His research work has resulted in numerous publications, awards, and invited platforms both nationally and internationally.

Learn more about Gabriele on his department page. 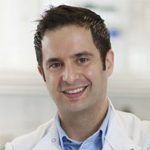 Position
Non-Stipendiary Lecturer in Medicine
Subject
Medicine and Biomedical Sciences
Department
Academic - Fellows & Lecturers
gabriele.deluca@ndcn.ox.ac.uk
We use cookies on our website to give you the most relevant experience by remembering your preferences and repeat visits. By clicking “Accept All”, you consent to the use of ALL the cookies. However, you may visit "Cookie Settings" to provide a controlled consent.
Cookie SettingsAccept All
Manage consent