Prof Mitchell’s research focuses on African archaeology, especially that of past hunter-gatherer populations in southern Africa, where he has undertaken or directed extensive fieldwork in Lesotho, most recently as Senior Consultant for the World Bank-funded Metolong Dam Archaeology Project. He is currently preparing a second edition of his synthesis of southern Africa’s archaeology, The Archaeology of Southern Africa (2002 Cambridge University Press). Recent papers of note have used stable isotope analysis to track the long-distance movement of ostrich eggshell beads across the southern African landscape (Stewart et al. 2020 PNAS 117; 6453-6462) and document unexpectedly early evidence of livestock-keeping by hunter-gatherer groups in highland Lesotho (Fewlass et al. 2020 Nature Human Behaviour 4: 791-799).

As well as his longstanding focus on southern Africa, Prof. Mitchell has written widely on Africa’s precolonial past and the relations between animals and people. Books on these themes include African Connections: Archaeological Perspectives on Africa and the Wider World (2005: AltaMira Press), The First Africans (2008: Cambridge University Press, co-authored with Larry Barham); The Oxford Handbook of African Archaeology (2013: Oxford University Press, co-edited with Paul Lane), Horse Nations: The Worldwide Impact of the Horse on Indigenous Societies Post-1492 (2015: OUP) and The Donkey in Human History (2018: OUP). His latest book, African Islands: A Comparative Archaeology, will be published by Routledge in April 2022.

Prof Mitchell’s research is facilitated by holding a Research Associateship at the Rock Art Research Institute, University of the Witwatersrand, Johannesburg, a connection that has also helped undergraduate members of St Hugh’s undertake fieldwork in South Africa and Lesotho. Although his own work emphasises the southern end of the continent, his doctoral students (several of them members of the College) have also worked in the Sahara and the Sahel, Kenya, and Madagascar.

Prof Mitchell is a past President (2004-2006) and Organizing Secretary (2018-22) of the Society of African Archaeologists, the 25th meeting of which was scheduled to take place at St Hugh’s in 2020 until it was derailed by the coronavirus pandemic. He is a long-serving member of the Governing Council of the British Institute of Eastern Africa, a Fellow of the Society of Antiquaries, and co-editor of the journal Azania: Archaeological Research in Africa.

Further information can be found on his School of Archaeology page. 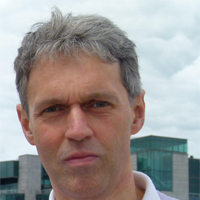 Position
Tutorial Fellow in Archaeology
Subject
Archaeology and Anthropology
Department
Academic - Fellows & Lecturers
peter.mitchell@st-hughs.ox.ac.uk
We use cookies on our website to give you the most relevant experience by remembering your preferences and repeat visits. By clicking “Accept All”, you consent to the use of ALL the cookies. However, you may visit "Cookie Settings" to provide a controlled consent.
Cookie SettingsAccept All
Manage consent