Professor Cristian Capelli was elected to an Honorary Fellowship in recognition of his contribution to College during his fourteen years with St Hugh’s as its inaugural Tutorial Fellow in Human Sciences, as well as his outstanding contribution to the College throughout this period.

Professor Capelli’s research focuses on human evolution, with a particular attention to the processes (cultural and historical) that have shaped the distribution of genetic variation across human populations.

Professor Capelli started a new role at the Universita’ di Parma in October 2020. 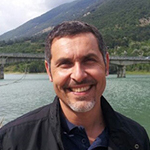