Giuseppe Stellardi studied in Pavia and Paris and worked in Cape Town and Lancaster, before joining Oxford University. His main research areas lie in modern Italian literature, but he’s also interested in literary theory and continental philosophy. He has written on Dossi, Tarchetti, Michelstaedter, Svevo, Gadda, Moravia, Eco, Morante; also, on Deconstruction (Derrida), on Pensiero debole (Vattimo), and on metaphor. He has published a book on metaphor in Derrida and Heidegger, and one on the work of Carlo Emilio Gadda, as well as a translation in English of Carlo Michelstaedter’s “La persuasione e la rettorica”. He currently works on temporality in 20th-century Italian literature.

For a current list of publications please see his Faculty page. 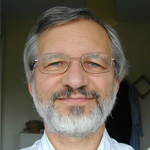 Position
Tutorial Fellow in Italian
Subject
Modern Languages
Department
Academic - Fellows & Lecturers
giuseppe.stellardi@st-hughs.ox.ac.uk
We use cookies on our website to give you the most relevant experience by remembering your preferences and repeat visits. By clicking “Accept All”, you consent to the use of ALL the cookies. However, you may visit "Cookie Settings" to provide a controlled consent.
Cookie SettingsAccept All
Manage consent