Professor Elizabeth Eva Leach gave the opening plenary lecture at the annual meeting of the Medieval Academy of America on 14 March 2015, where she revealed how one can find the traces of music in medieval text, obvious to its contemporary readers, but difficult to spot for a modern audience.

In her lecture ‘Richard de Fournival Across the Disciplines’, Professor Leach examines the 13th century scholar Richard de Fournival, who was well known for his works as a poet and musician, and who at the same time wrote about alchemy and served as the personal surgeon to King Philip Augustus. His most famous work was Bestiaire d’amour – The Bestiary of Love – a French prose work that combines a love letter with a bestiary.

Professor Leach finds that although you cannot find a single musical notation in this work, The Bestiary of Love is filled with references to music, something that those who read it in the 13th century would have quickly seen, but that we in the 21st century would be unaware of.

Fournival presents various animals in the bestiary, those not usually found in these kinds of works. He introduces animals that are known for the noises they make and those who are awful to listen to. The most obvious song reference in The Bestiary of Love is when he the narrator cites lines from a recently written song to support his views about the necessity of equality in love. The lines are taken from a 1230s song written by a French troubadour named Bernart de Ventadorn, although Fournival slightly garbles them, probably intentionally.

The final inclusion of music in the text comes at the very end of The Bestiary of Love, where the author adds a refrain that opens a well-known polyphonic motet:

Mercy, from which I
expected help and aid, is so
far removed from me.

Professor leach explained that: ‘Outside the Bestiary of Love, these three lines continue to become a fourteen-line poem, set to music. Arguably the musical nature of the refrain aids the memory of the entire text. I’m going to use some modern examples to show how the refrain citation works: If I said “regrets, I’ve had a few” you might think – or even sing, at least in your head – “but then again, too few to mention”. Or “Twinkle, twinkle, little star” might lead to “how I wonder what you are.” and so on. 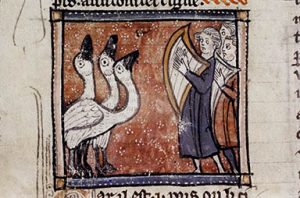 In these ways, Richard de Fournival gives his readers, who often will be reading their text out loud to an audience, spots where music can come out. She added that: ‘The Bestiary of Love shows how music provides intertextual and sub textual information for illuminations, prose and citations. That music could do this without needing to have its own kind of notation was important in eliciting sounds from the memories of its original audience. This lack of music notation means that it is all too easy for this kind of musicality to remain silent in the context of modern academic disciplines; the benefit of attending to the songs an unsung text conjures up is potentially great.’

Professor Leach is a Tutorial Fellow in Music at St Hugh’s college. She has been awarded a Major Research Fellowship by the Leverhulme Trust for three years, for her research project ‘Douce 308 and the contexts of vernacular song c.1300′. She was recently awarded the Dent Medal by the Royal Musical Association.

More details about the topics in her lecture: Richard de Fournival’s Bestiary of Love and Refrains in odd places can be read on her blog. You can also follow her on Twitter @eeleach.

Article credit: with thanks to Medievalists.net

St Hugh's is very pleased to be hosting an exhibition on the history of the DPhil at Oxford. One of our alumna, Dr Evelyn Simpson, was the first woma...
Read More

The College will be celebrating the Avril Bruten Award for Creative Writing, at an event hosted by award-winning writer Kirsty Gunn, this year's compe...
Read More
We use cookies on our website to give you the most relevant experience by remembering your preferences and repeat visits. By clicking “Accept All”, you consent to the use of ALL the cookies. However, you may visit "Cookie Settings" to provide a controlled consent.
Cookie SettingsAccept All
Manage consent