Congratulations to St Hugh’s Boat Club (SHBC) who had a spectacular week at Torpids with both the M1 and W1 boats bumping on three of the four days. W1 gained two places overall and M1 gained three places strengthening their position at 7th in division 2, the highest position for any Hugh’s Men’s boat in the Torpids bumps charts.

“This Hilary was the first time in a few years we were able to run a somewhat normal bumps campaign, due to river restrictions in 2019/20 and COVID-19 since. The way our club has emerged from this is a great cause for celebration. As a club, across 3 boats we gained five places in the bumps charts and no boat dropped a single place on any given day, a feat only matched by one or two other clubs.

M2 managed to row over all four days, something that is extremely rare and was only matched by the two crews at the very top of the bumps charts. Some highlights include a great fight with Linacre who closed on them on day two but were held off by some fantastic steering and strong rowing from the crew. On day four they were being chased by three crews on for blades, but managed to escape all of them thanks in no small part to the chasing Wolfson boat having a meeting with the bank. Another more amusing highlight was on day one, where one of the boats managed to spend part of the race with its head in the water after a major crab, but the crew recovered and finished strong.

W1 gained two places overall. A speedy bump on Worcester on day one followed by a nice clean row over on day two, where they nearly had the legs to over bump Peter’s ahead set up a day three with a speedy St Antony’s behind. They were unfortunately bumped before they could bump St Peter’s but still managed to gain a place on the day as Peter’s bumped St John’s after they were bumped by us (sorry if this is slightly complicated!). Once again on day four W1 were bumped by a blades-winning Exeter crew but showed the fight to go on and bump St Johns, keeping the record of not dropping a place across all boats and finishing very respectably at 4th in division 3.

M1 gained three places, with three quick bumps on the first three days and a day four row over to cement their position at 7th in division 2, the highest position for any Hugh’s Men’s boat in the Torpids bumps charts. Contrary to what the results may suggest, the first three days were messy rows which the boys were quite disappointed with – their strength carrying them to quick bumps against weaker crews (Corpus, Mansfield and St Johns respectively). Day four was a much better row where, chased by a very strong Exeter crew who closed to less than half a length fairly quickly, the boys showed the fight that has characterised all our crews this year to hold them off the whole way and deny them their blades (in fact, this was the only day that any of the Exeter crews failed to bump).

As we look ahead to next term, we are hoping to build on these successes. Particular aims are to get a W2 boat out and racing, and of course the long term goal for M1 of reaching division 1 is within reach for the first time (starting at 4th in division 2), although this will need a huge effort and perhaps a slice of luck.”

Below are some photos of the women’s and men’s crews at Torpids. 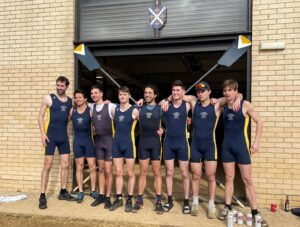 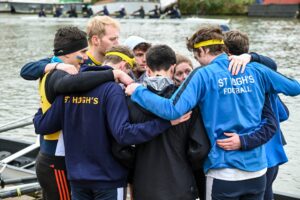 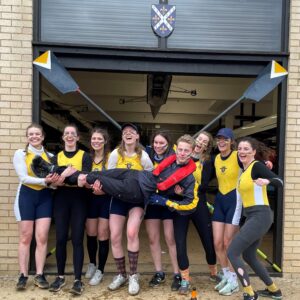 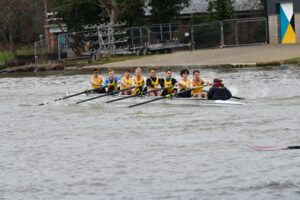 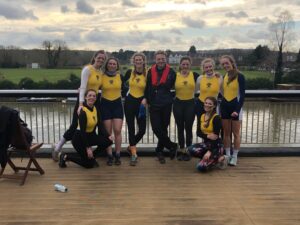