Avril presented an over-sized cheque to the Principal, The Rt Hon. Dame Elish Angiolini DBE QC FRSE, at her 100th birthday Zoom party, during which she told the Principal how immensely grateful she was for her College education: “I was particularly keen to be able to give back to St Hugh’s after the support the College, and particularly the Principal at the time, Barbara Gwyer, gave me after my father’s business was destroyed in the Exeter blitz of 1942 during my final year.”

During the Zoom party, Dame Elish said, “The College is extremely proud to be part of this celebration and of all that Avril has achieved. We are truly grateful for her generous donation to our College Student Support Fund which enables us to ensure that bright and capable students have the opportunity to study at St Hugh’s regardless of their financial situation”.

Avril’s time at St Hugh’s coincided with the period during which St Hugh’s was requisitioned as a military hospital for head injuries. Avril combined her work as a lexicographer with the raising of a family of four children. She retired from her job as assistant editor of the Medieval Latin Dictionary (British Academy) in 1986. After that she did part time editorial work on Curia Regis Rolls for the Public Record Office (now National Archives). She has spent much time on family history and wrote about the life of her mother-in-law. With W.R. Powell she published the revised edition of A Medieval Farming Glossary of Latin and English Words, Essex Record Office, in 1998. Impressively, she can still complete The Times Latin crossword. 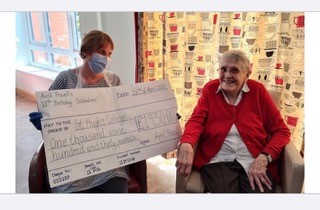 St Hugh’s Fellow in French in Conversation with Constance Debré

Constance Debré is a former lawyer and a contemporary French writer with an interest in life writing and questions of ge...
Read More

The following article is the first in a series entitled #HumansofStHughs which feature stories written by St Hugh's undergraduate students about their...
Read More
We use cookies on our website to give you the most relevant experience by remembering your preferences and repeat visits. By clicking “Accept All”, you consent to the use of ALL the cookies. However, you may visit "Cookie Settings" to provide a controlled consent.
Cookie SettingsAccept All
Manage consent