We are delighted to announce that the work of Dr Peter Leary, Canon Murray Fellow in Irish History, has been recognised by the American Conference for Irish Studies (An Chomhdháil Mheiriceánach do Léann na hÉireann). Dr Leary’s recent work on the history of the Irish border, Unapproved Routes (Oxford University Press, 2016) was awarded the Conference’s hotly contested Donald Murphy Prize for Distinguished First Book.

‘The delineation and emergence of the Irish border radically reshaped political and social realities across the entire island of Ireland. For those who lived in close quarters with the border, partition was also an intimate and personal occurrence, profoundly implicated in everyday lives. Otherwise mundane activities such as shopping, visiting family, or travelling to church were often complicated by customs restrictions, security policies, and even questions of nationhood and identity. The border became an interface, not just of two jurisdictions, but also between the public, political space of state territory, and the private, familiar spaces of daily life.

The effects of political disunity were combined and intertwined with a degree of unity of everyday social life that persisted and in some ways even flourished across, if not always within, the boundaries of both states. On the border, the state was visible to an uncommon degree – as uniformed agents, road blocks, and built environment – at precisely the same point as its limitations were uniquely exposed. For those whose worlds continued to transcend the border, the power and hegemony of either of those states, and the social structures they conditioned, could only ever be incomplete. As a consequence, border residents lived in circumstances that were burdened by inconvenience and imposition, but also endowed with certain choices.

Influenced by microhistorical approaches, Unapproved Routes uses a series of discrete ‘histories’ – of the Irish Boundary Commission, the Foyle Fisheries dispute, cockfighting tournaments regularly held on the border, smuggling, and local conflicts over cross-border roads – to explore how the border was experienced and incorporated into people’s lives; emerging, at times, as a powerfully revealing site of popular agency and action.’ 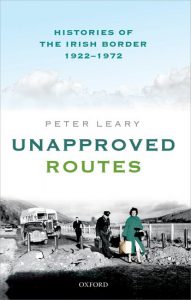 In awarding the prize, the ACIS Prize Committee commented:

‘Peter Leary’s Unapproved Routes is a timely and sensitive exploration of everyday life on the Irish border in the half century between 1922 and 1972. This conceptually sophisticated book deftly marries historical and anthropological analysis to critical theory, examining such diverse subjects as salmon fishing, cockfighting, smuggling, and border-crossing roads in order to reveal the ways in which the border simultaneously reified state power and exposed its limits. Leary’s empathetic study of Irish people on the periphery–both spatially and socially–-demonstrates that Partition opened as well as closed opportunities for marginalized groups on either side of the divide. It reminds us, too, that the relationship between official rhetoric, public policy, national identity, and lived experience is complex and contested. The committee is delighted to award Unapproved Routes the Donald Murphy Prize for Distinguished First Book.’

You can learn more about Unapproved Routes on the Oxford University Press website here, and read about the other prizes awarded by the American Conference of Irish Studies here.