Professor George Garnett, Tutorial Fellow in History, traveled to Beijing this September as part of the Institute of Historical Research’s delegation to the British-Chinese History Conference, the topic for which was ‘The History and Influence of Magna Carta’. Professor Garnett describes his experience below. 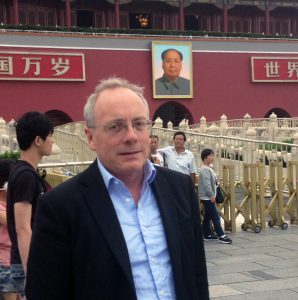 ‘The Chairman and Mao’ (Photograph by Dr Alexander Lock)

‘In early September I was a member of the Institute of Historical Research’s delegation to the triennial Sino-British Congress of Historians, which took place at Peking University (the old-fashioned spelling is retained there with some pride, because the university is a nineteenth-century foundation, and the most prestigious university for the arts in China).

‘Somewhat surprisingly, at least to the British contingent, the choice of topic – Magna Carta – came from the Chinese end, and, as it were, by return of post. But once we arrived in Beijing it became clear that the choice had been an informed one, and that it had been sanctioned at the very highest official level. Our hosts wanted to explore not only the thirteenth-century context of Magna Carta, but also its afterlife: the central role it came to play in circumscribing the executive and in establishing individual liberty.  I chose to talk about Sir Edward Coke’s seventeenth-century commentary on Magna Carta – specifically about the link Coke forged between the Charter and habeas corpus, and the connection between this jurisprudential sleight of hand and his influential role in the opposition to James I and Charles I. I did so in the expectation that the reaction would be interesting.

‘It was. It became clear that this was exactly what the audience wanted to hear, but they wanted to hear it all dressed up in the academic obscurity of a different country and a bygone age. When, occasionally, one of the British contingent attempted to draw explicit modern Chinese inferences or parallels, the atmosphere in the conference room froze, and after a short pause one of the hosts would change the topic of discussion.

‘I was left with the impression that our visit had been designed to play a small, walk-on part in current debates within the CPC’.

Congratulations to St Hugh's Men's First Boat who not only won blades but also made history by reaching the highest position ever reached on the river...
Read More

We were delighted to welcome so many guests to our inaugural 'Lady Ademola Lecture' which is part of the College's series celebrating the life and wor...
Read More

We are delighted to announce that Professor Rebecca Shipley, who matriculated in 2001 and completed both her MMath and her DPhil at St Hugh’s, has b...
Read More