We are delighted to announce the Governing Body of St Hugh’s College have voted to elect Genevieve Adams to an Honorary Fellowship.

Genevieve was elected to an Honorary Fellowship in recognition of her outstanding contribution to the College as both a School Teacher Fellow and later as a Lecturer, and for her teaching of French to St Hugh’s students over many years.

Genevieve first joined St Hugh’s in Trinity Term 1996, while on sabbatical from her teaching post as Head of Languages at Withington Girls’ School (WGS) in Manchester. She was permitted to take the sabbatical by the school on the condition that it be of a scholarly nature, so when Genevieve saw an advertisement in the Times Literary Supplement for a Teacher Fellow post at St Hugh’s she knew she had to apply. Genevieve recalls, “I first became aware of St Hugh’s when the College Principal, Rachael Trickett, came as guest speaker to WGS’s Founders Day back in the late seventies. Rachael was a friend of the Headmistress”. During this time at the College Genevieve focused her research on French women writers during the period of the French Revolution.

Genevieve continued, “I would trot off every morning to the Bodleian and the Taylorian to carry out my research, and it was such a thrill to discover what books and documents were in the shoe boxes, especially as few people were able to gain access to these. There was one particular text on Marie Antoinette which had been written anonymously, but I had an idea of the writer’s name because of her style of writing and her political sway. There is an amusing link between my research on Queen Marie-Antoinette and St Hugh’s, as Principal Miss Jourdain accompanied by Miss Moberley, Vice Principal, caused a sensation claiming they came across the ghost of the Queen in the Hamlet grounds at Versailles!”

In 2004, Dr Michael Holland, Tutorial Fellow in French, approached Genevieve to ask if she would be interested in taking a permanent post at St Hugh’s. Having just recently decided to leave teaching, Genevieve accepted and relocated to Oxford to start at St Hugh’s in Michaelmas 2004. Genevieve retired in Trinity 2018, having worked with the last three Principals of the College.

Reflecting on her career, Genevieve said, ”My fifty years of service in education are a measure of my commitment to young people’s progress, in particular with Modern Languages. I taught English in France, French in Britain, youngsters ranging from 9 to 23, in inner city comprehensive schools and in Oxford University colleges. I have always liked a challenge! Right now, I rather fear for young people’s education, home schooling is far from pedagogically ideal, particularly for languages. It grieves me that so many cannot see how the study and use of a foreign language enriches a person’s mind. As someone who received her education entirely through the state system, in France, I am troubled by the obstacles many youngsters have to surmount over here. St Hugh’s has a role to play in this to ensure that as many students as possible are offered the opportunity to achieve their best. I trust college to have this at heart.

”I would like to take this opportunity to thank the Principal and Governing Body for the honour they have kindly accorded me.”

St Hugh’s Principal, Dame Elish Angiolini, said, “Our Governing Body Fellows were fulsome in their praise of Genevieve’s superb and highly professional language teaching, as well as her cultural and research interests and wonderful service to the whole College community. We are so pleased that Genevieve will remain within the College community not just as an Honorary Fellow, but a great friend to many staff and students.”

In January 2019, Genevieve had the extraordinary honour of being named a Chevalier dans l’Ordre des Palmes académiques, bestowed by the decree of the Prime Minister of France for a “remarkable commitment to the service of education”.

The photograph below is of Genevieve (right) pictured with Professor Ève Morisi (centre), and Ann Jefferson, Professor Emerita of French at New College (left), during an event to celebrate Genevieve’s award. 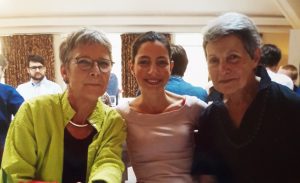 Congratulations to Professor Horst Eidenmüeller, who has been elected to a Senior Research Fellowship of the Bavarian Research Institute for Digital ...
Read More

Dr Jon Parkin, Tutorial Fellow in History, has been appointed as Director of the recently launched Oxford Centre for Intellectual History. Oxford i...
Read More

Dr Anke Hein, the Peter Moores Associate Professor in Chinese Archaeology, and Fellow of St Hugh's College, is organising an online conference entitle...
Read More
We use cookies on our website to give you the most relevant experience by remembering your preferences and repeat visits. By clicking “Accept All”, you consent to the use of ALL the cookies. However, you may visit "Cookie Settings" to provide a controlled consent.
Cookie SettingsAccept All
Manage consent