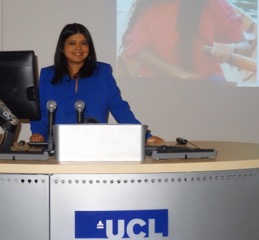 She gave her inaugural lecture “E = mitochondria x Children2: A Tale of Two Genomes” to an audience including Professor John Morris, Emeritus Fellow and Lecturer in Medicine at St Hugh’s College.

Professor Rahman researches the genetics of rare mitochondrial genetic diseases and holds honorary consultant appointments at Great Ormond Street Hospital and the National Hospital for Neurology, where she sees children and adults affected by mitochondrial diseases as part of the NHS Specialised National Clinical Service for Rare Mitochondrial Disorders.

Congratulations to Suzy Klein (Music, 1993) who was appointed BBC Head of Arts and Classical Music TV in October 2021 and whose first season of new pr...
Read More
We use cookies on our website to give you the most relevant experience by remembering your preferences and repeat visits. By clicking “Accept All”, you consent to the use of ALL the cookies. However, you may visit "Cookie Settings" to provide a controlled consent.
Cookie SettingsAccept All
Manage consent