Early humans adapted to living in rainforests much sooner than thought

An international research team has shed new light on the diet of some of the earliest recorded humans in Sri Lanka. The researchers from Oxford University, working with a team from Sri Lanka and the University of Bradford, analysed the carbon and oxygen isotopes in the teeth of 26 individuals, with the oldest dating back 20,000 years and found that nearly all the teeth analysed suggest a diet largely sourced from the rainforest. Lead author, Patrick Roberts, is a St Hugh’s doctoral student specialising in the investigation of early human adaptations from Oxford’s Research Laboratory for Archaeology and the History of Art.

This study, published in the early online edition of the journal, Science, shows that early modern humans adapted to living in the rainforest for long periods of time. Previously it was thought that humans did not occupy tropical forests for any length of time until 12,000 years after that date, and that the tropical forests were largely ‘pristine’, human-free environments until the Early Holocene, 8,000 years ago. Scholars reasoned that compared with more open landscapes, humans might have found rainforests too difficult to navigate, with less available food to hunt or catch.

The Science paper also notes, however, that previous archaeological research provides ‘tantalising hints’ of humans possibly occupying rainforest environments around 45,000 years ago. This earlier research is unclear as to whether those early human dwellers of the rainforest were engaging in a specialised activity or whether they entered the rainforest for only limited periods of time in certain seasons rather than remaining there all year round.

Co-author Professor Julia Lee-Thorp from Oxford University said: ‘The isotopic methodology applied in our study has already been successfully used to study how primates, including African great apes, adapt to their forest environment. However, this is the first time scientists have investigated ancient human fossils in a tropical forest context to see how our earliest ancestors survived in such a habitat.’ 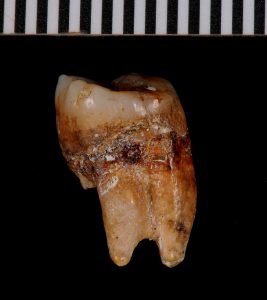 The researchers studied the fossilised teeth of 26 humans of a range of dates – from 20,000 to 3,000 years ago. All of the teeth were excavated from three archaeological sites in Sri Lanka, which are today surrounded by either dense rainforest or more open terrain. The analysis of the teeth showed that all of the humans had a diet sourced from slightly open ‘intermediate rainforest’ environments. Only two of them showed a recognisable signature of a diet found in open grassland. However, these two teeth were dated to around 3,000 years, the start of the Iron Age, when agriculture developed in the region. The new evidence published in this paper argues this shows just how adaptable our earliest ancestors were.

Lead author, Patrick Roberts said: ‘This is the first study to directly test how much early human forest foragers depended on the rainforest for their diet. The results are significant in showing that early humans in Sri Lanka were able to live almost entirely on food found in the rainforest without the need to move into other environments. Our earliest human ancestors were clearly able to successfully adapt to different extreme environments.’

Co-author Professor Mike Petraglia from Oxford University said: ‘Our research provides a clear timeline showing the deep level of interaction that early humans had with the rainforest in South Asia. We need further research to see if this pattern was also followed in other similar environments in Southeast Asia, Melanesia, Australasia and Africa.’

More images of the trip are available on our Facebook page.

Scientists affiliated with St Hugh's College have contributed to the development of AI-driven software that is capable of tracking the faces of primat...
Read More

St Hugh’s Fellow and Professor of Physical Oceanography David Marshall has contributed to a new study on the phenomenon of Atlantic meridional overt...
Read More
We use cookies on our website to give you the most relevant experience by remembering your preferences and repeat visits. By clicking “Accept All”, you consent to the use of ALL the cookies. However, you may visit "Cookie Settings" to provide a controlled consent.
Cookie SettingsAccept All
Manage consent