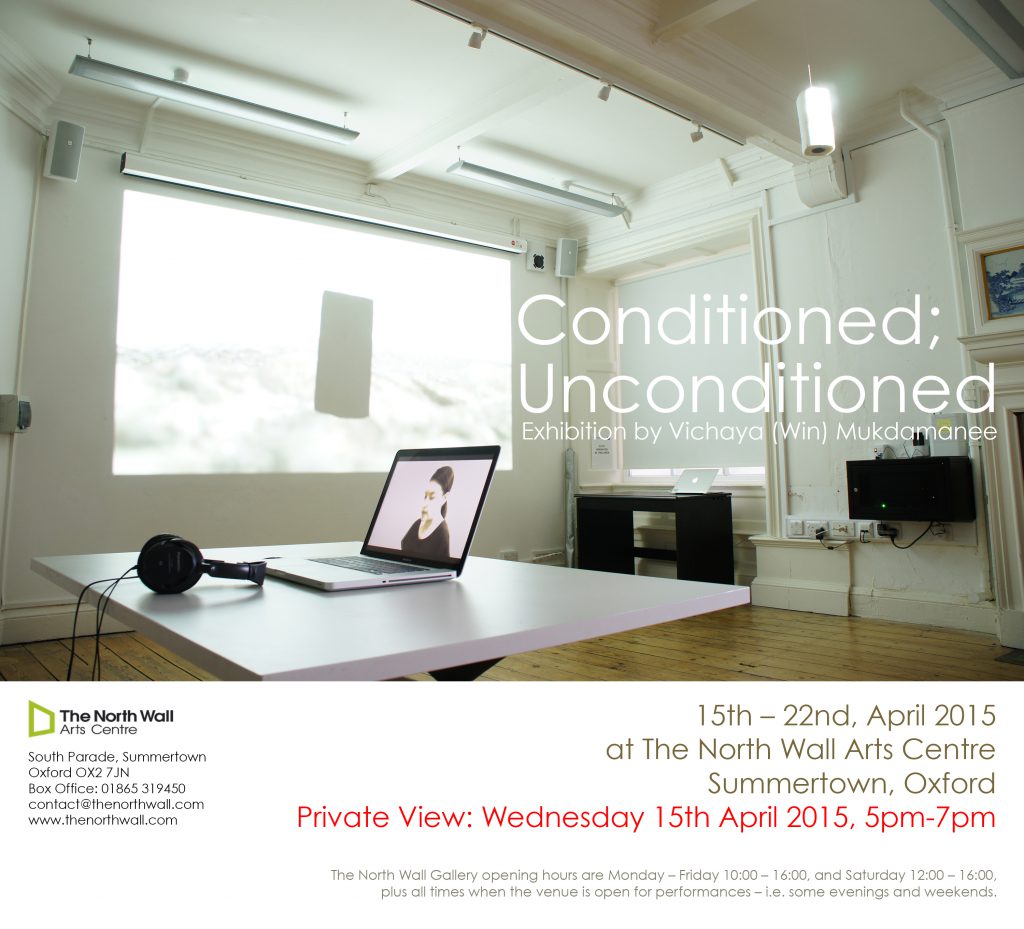 The North Wall Arts Centre presents the exhibition “Conditioned; Unconditioned” by St Hugh’s graduate student Vichaya (Win) Mukdamanee, an artist from Thailand who is studying Fine Art at the Ruskin School of Art. The exhibition will be held from 15-22 April 2015 with the private view on Wednesday 15 April 5-7pm.

Vichaya’s research project is created to explore the sense of ‘egolessness of existence’ and ‘aesthetic of emptiness’. The main objective is to study, through the art creative process, the meaning of the conditioned-unconditioned; thing-nothing; permanence-impermanence; self-selfless, which together create the core structure of Buddhist teaching. It is probably true that a lot of Buddhist philosophy cannot be seen with eyes but they can be sensed or perceived through practicing and actual experience. Therefore, instead of trying to illustrate the absolute emptiness of mind through images and symbols, Vichaya uses his artwork to question whether it is possible to create ‘awareness of self’ that, as a consequence, can probably generate the feeling of ’emptiness’ directly into the audiences’ thought.

Using various media available in today’s contemporary art, including performance and video, Vichaya investigates how to transform ideas from verbal explanations in Buddhist teaching into art concept and apply them into different forms of art making mechanisms. On the other hand, it can be said that his art research acts as a continuous learning experience that coincides with the practice persistent in Buddhism. To a certain extent, he applies the idea of meditation and self-purifications into the repetitive endless performance, in order to generate the awareness of impermanence and to portray the continuous cycle of success and failure. The repeated action applies to how humans keep trying to fulfil the infinite requirement and limitless desire of ‘self’ without realising that such process is never-ending.

The linkage between digital image and hand-made symbolizes the co-existence of idealistic and actuality generated from religious texts and ritual practices. The artist questions how the objects can carry their meaning, experience, and action without real absolute entity by creating multiple re-configurations and re-representations. Found objects used in daily life, are transformed into varied art forms. The images of objects and the actions documented in the video are continuously re-transferred onto paper and canvases. All series of artwork are, therefore, interrelated to each other, not only that their physical appearances are developed or built up on one another, but they can also be seen tighter as an on-going process of study that reflects the artist’s awareness of the overlapping relationships between Buddhist philosophy, lives and art.

Vichaya (Win) Mukdamanee received his Bachelor Degree of Fine Art from Silpakorn University in Bangkok and as a Fulbright scholar he then received his Master Degree of Fine Art from Pratt Institute in New York. He has had a number of solo exhibitions both inside and outside of Thailand and his artwork has also been shown in many group exhibitions. Vichaya’s principal research interest involves the relationship between art, objects and materials that together reflect the meaning of contemporary daily life, especially in the urban society. He creates artwork in varied forms; drawing, painting, sculpture, video and installation. Currently, he mainly focuses in the Buddhist aesthetics and Thai belief that are developed out of ritual and canonical Buddhist teachings.

St Hugh's is very pleased to be hosting an exhibition on the history of the DPhil at Oxford. One of our alumna, Dr Evelyn Simpson, was the first woma...
Read More
We use cookies on our website to give you the most relevant experience by remembering your preferences and repeat visits. By clicking “Accept All”, you consent to the use of ALL the cookies. However, you may visit "Cookie Settings" to provide a controlled consent.
Cookie SettingsAccept All
Manage consent