The diverse genetic ancestry of the Americas has been mapped in research by Professor Cristian Capelli, Tutorial Fellow in Human Sciences, and colleagues. The study compared the ‘donor’ DNA of current Africans and Europeans with ‘recipient’ American populations to identify where their ancestors came from. The team compared 4,000 DNA samples from 64 populations.

The research highlights the influence of the slave trade and other historical events on genetics in the Americas, and reveals a previously unrecognised contribution from certain European and African populations such as Basque lineages in South America.

‘It was interesting to find so much complexity in the ancestry of American people.’ said Professor Capelli in an interview with DailyMail.com. 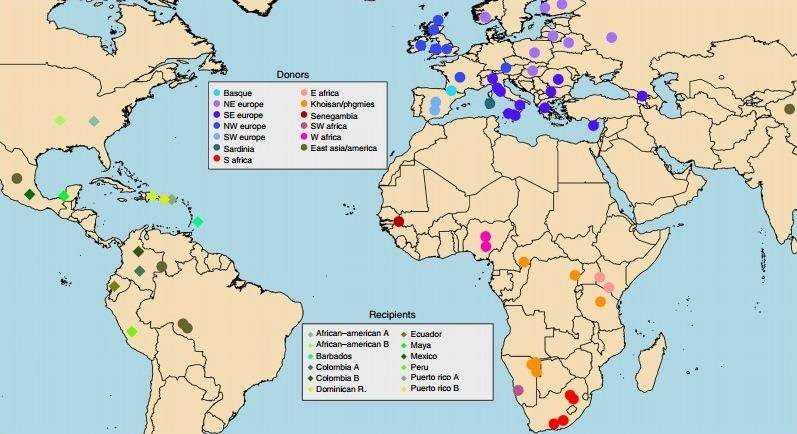 The study also found that while Spaniards provide the majority of European ancestry in in continental American Hispanic/Latino populations, the most common European genetic source in African-American and Barbadians comes from the UK.

Some of the findings were consistent with historical records. ‘We can see the huge genetic impact that the slave trade had on American populations and our data match historical records.’ said study author Dr Garrett Hellenthal form the UCL Genetics Institute. ‘The majority of African Americans have ancestry similar to the Yoruba people in West Africa, confirming that most African slaves came from this region.’

The team, which also includes researches from University College London and the Università Cattolica del Sacro Cuore of Rome, now hope to use the same approach to look at other populations with diverse genetic contributions, such as Brazilians.

Read the full article on the Nature Communications website.

Scientists affiliated with St Hugh's College have contributed to the development of AI-driven software that is capable of tracking the faces of primat...
Read More

St Hugh’s Fellow and Professor of Physical Oceanography David Marshall has contributed to a new study on the phenomenon of Atlantic meridional overt...
Read More
We use cookies on our website to give you the most relevant experience by remembering your preferences and repeat visits. By clicking “Accept All”, you consent to the use of ALL the cookies. However, you may visit "Cookie Settings" to provide a controlled consent.
Cookie SettingsAccept All
Manage consent