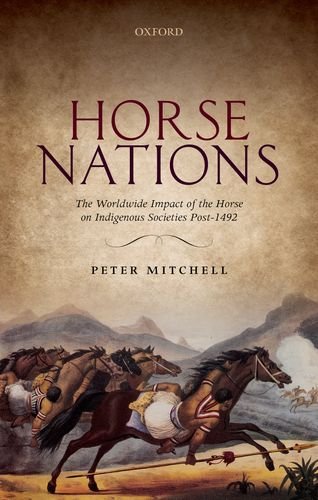 Professor Peter Mitchell, Tutorial Fellow in Archaeology, has recently published a new book, the first study examining the global coverage of the impact of the horse on indigenous societies from 1492 onwards.

Horse Nations: The Worldwide Impact of the Horse on Indigenous Societies Post-1492 was published by Oxford University Press on 26 March 2015.

The Native American on a horse is an archetypal Hollywood image, but though such equestrian-focused societies were a relatively short-lived consequence of European expansion overseas, they were not restricted to North America’s Plains.

Horse Nations provides the first wide-ranging and up-to-date synthesis of the impact of the horse on the Indigenous societies of North and South America, southern Africa, and Australasia following its introduction as a result of European contact post-1492. Drawing on sources in a variety of languages and on the evidence of archaeology, anthropology, and history, the volume outlines the transformations that the acquisition of the horse wrought on a diverse range of groups within these four continents. It explores key topics such as changes in subsistence, technology, and belief systems, the horse’s role in facilitating the emergence of more hierarchical social formations, and the interplay between ecology, climate, and human action in adopting the horse, as well as considering how far equestrian lifestyles were ultimately unsustainable.

Of interest to scholars and students of world history, hunter-gatherer studies, animal history, archaeology, and material anthropology, it would also appeal to a general reader keen to learn more about one of the most widespread and distinctive cultural transformations of the past 500 years.

Congratulations to Dr Tom Kuhn, Tutorial Fellow in German at St Hugh’s, on the ...
Read More

Congratulations to Professor Ève Morisi on the publication of ‘Death Sentences: Literature and State Killing’

Death Sentences: Literature and State Killing, co-edited by Professor Ève Morisi, Tutorial Fellow in French, along with Dr Birte Christ, has...
Read More
We use cookies on our website to give you the most relevant experience by remembering your preferences and repeat visits. By clicking “Accept All”, you consent to the use of ALL the cookies. However, you may visit "Cookie Settings" to provide a controlled consent.
Cookie SettingsAccept All
Manage consent