St Hugh’s has loaned a letter written by novelist and alumna Mary Renault (English Language and Literature, 1925) to the British Library for their exhibition: “Alexander the Great: The making of a Myth”. Mary wrote the letter to her friend and contemporary alumna, Kasia Abbott in 1972 in which she discusses her new novel, The Persian Boy which is narrated by Bagoas, a young Persian who becomes the lover and most faithful servant of Alexander the Great.

After graduating from St Hugh’s in 1928,  Mary worked as a nurse and began writing her first novels which were contemporary romances. In 1948, she moved to South Africa with her partner Julie Mullard, where she spent the rest of her life. She devoted herself to writing historical fiction in the 1950s which were her most successful books. She is best known for her historical novels set in ancient Greece. 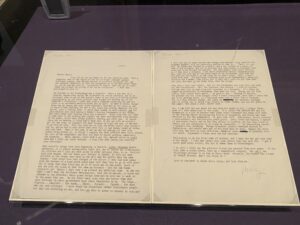