For anyone at St Hugh’s, it’s impossible to miss the fitness and fundraising activities of our College Bursar, Vicki Stott. Vicki is often sporting Lycra exercise gear – be it for the popular Body Pump classes she’s set up, or another training session for her latest charity run. In the process, she has raised well over £5,000 for the Alzheimer’s Society and DASH, a charity working to end domestic violence and support the victims of this abuse.

Vicki’s campaign has involved some unusual tactics, such as distributing tubes of smarties to the college community, to be returned with the chocolate replaced by coins to donate to the charity. She caught the attention of local media, and the whole Stott clan was featured recently as BBC Radio Oxford Breakfast Show’s Family of the Week. 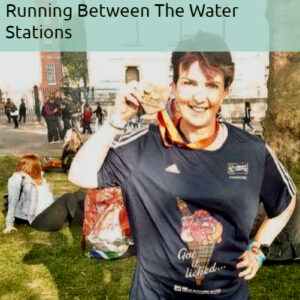 Throughout these efforts, Vicki has been sharing her experiences online. You can catch up with her latest news on her running blog, ‘Running Between Water Stations’. Her posts are a mix of hard-won training lessons, personal revelations, the solidarity of runners during the race, and the sheer agonies of pushing herself to the limit and beyond. For anyone aspiring to achieve things they think might be beyond them, it really is an inspiring read.

Vicki’s latest, and most gruelling, endeavour has been this year’s London Marathon, on April 24th. Already nursing an injury on the way in, it became clear that completing the distance would be a major challenge. Despite losing a toenail in the closing stages of the race, she managed to cross the line, in a demonstration of real grit and determination. Having set out with an initial fundraising aim of just over £1,000, Vicki’s grand total now stands at almost £3,500, a massive achievement.