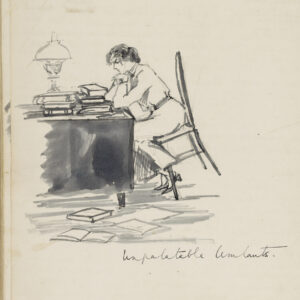 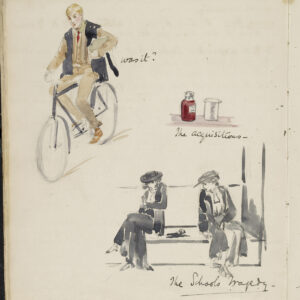 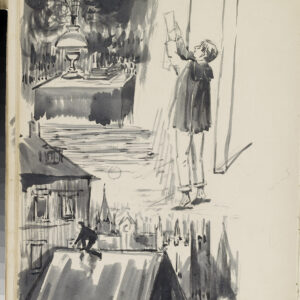 ‘”Dare unchaperoned to gaze”: A Woman’s View of Edwardian Oxford’ is to be launched on 16th October at an event in the St Hugh’s College Library. The book is edited by Tutorial Fellow in History, Professor George Garnett and transcribed by former Librarian, Debbie Quare, Librarian, Nora Khayi, and Archivist, Amanda Ingram.

At the start of Michaelmas Term 1905 two bright and vivacious students at St Hugh’s Hall, Oxford – Dorothy Hammonds and Margaret Mowll – decided to start a Diary. In it, they observed with wry and occasionally arch amusement daily life in the Hall and the wider University. What is most remarkable are Dorothy’s delightful sketches, which accompany most entries. The Diary has hitherto been the most revealing piece of hidden treasure in the archive of St Hugh’s College. This facsimile edition will allow modern readers to view Edwardian Oxford through the eyes of these two witty young women.

Contact the Development Office development.office@st-hughs.ox.ac.uk to order the book at a special price of £15 before 17th October, or £20 after 17th October.

We were delighted to be able to welcome our first Ukrainian Graduate scholarship holder, Taras Prodaniuk, to St Hugh's at the beginning of Michaelmas ...
Read More

Former colleagues and pupils will be distressed to learn that Susan Wood died on 30 December 2022, aged 97. Her funeral will take place at St Mary Mag...
Read More
We use cookies on our website to give you the most relevant experience by remembering your preferences and repeat visits. By clicking “Accept All”, you consent to the use of ALL the cookies. However, you may visit "Cookie Settings" to provide a controlled consent.
Cookie SettingsAccept All
Manage consent